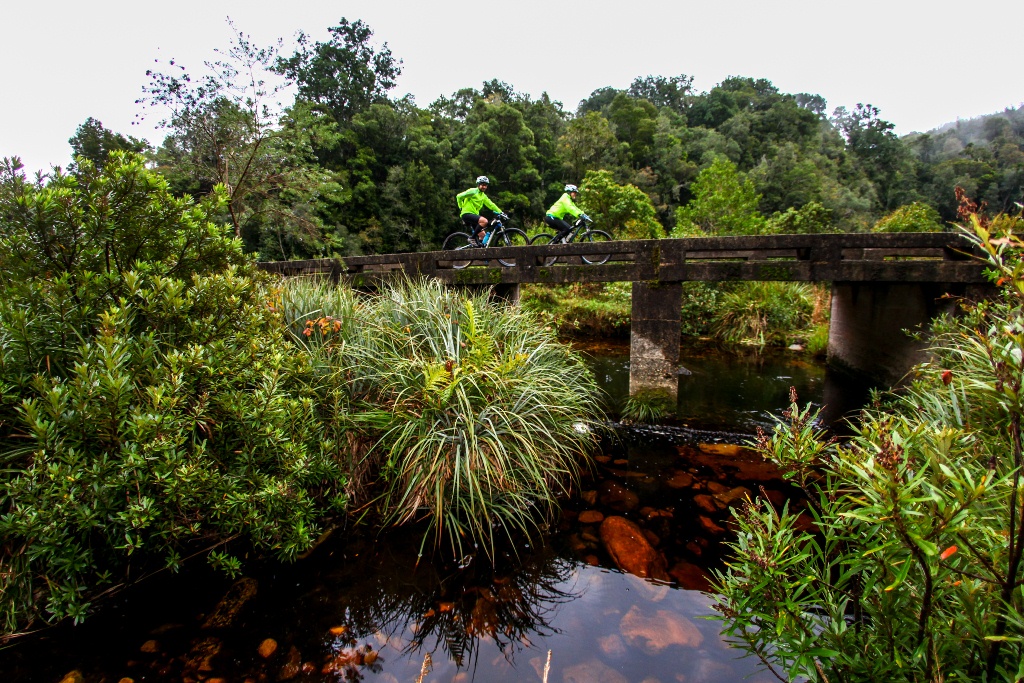 The opening stage of the 2017 Glacier Storms River Traverse saw the riders take on the route which had initially been planned for Stage 3. The change in route and overnight rain did not dampen the riders spirits though as they revelled in the relaxed social riding.

The Glacier Storms River Traverse opened then with a 50.7km long route, which looped out towards the east from the race village at the Tsitsikamma Village Inn. Riding east meant that the descent to and the ascent from the Storms River Gorge would be made twice, which proved the most challenging section of the route. The remainder of the route was largely made up of easy riding, with a few muddy sections providing an additional challenge.

Overnight rain had left the roads and trails muddy but not as muddy as many had feared. And though the sky was overcast the rain held off throughout the stage providing unexpectedly warm riding conditions.

True to form as the event with the best ratio of women to men in mountain biking, there were 95 women among the nearly 300 starters and a woman crossed the finish line first on the stage too. Yolande de Villiers set the pace at the front of the race, leading from the gun to the line. The first man across the finish line was Vincent Hill, while the first team to finish the stage was the mixed category combination of Sarah Hill and Gavin Salt – riding for the Glacier Storms River Traverse’s bike sponsors Liv/Giant.

Spent day chasing insanely fast @YolandeDV7 through Stage 1 of @SRTraverse. In a bakkie, with @SeamusAllardice. We struggled to catch her. pic.twitter.com/sdQMVURMt9

Stage 2 is expected to be a muddier affair but takes in arguably the most beautiful section of the Glacier Storms River Traverse when the riders roll along the Indian Ocean towards the Storms River Mouth.