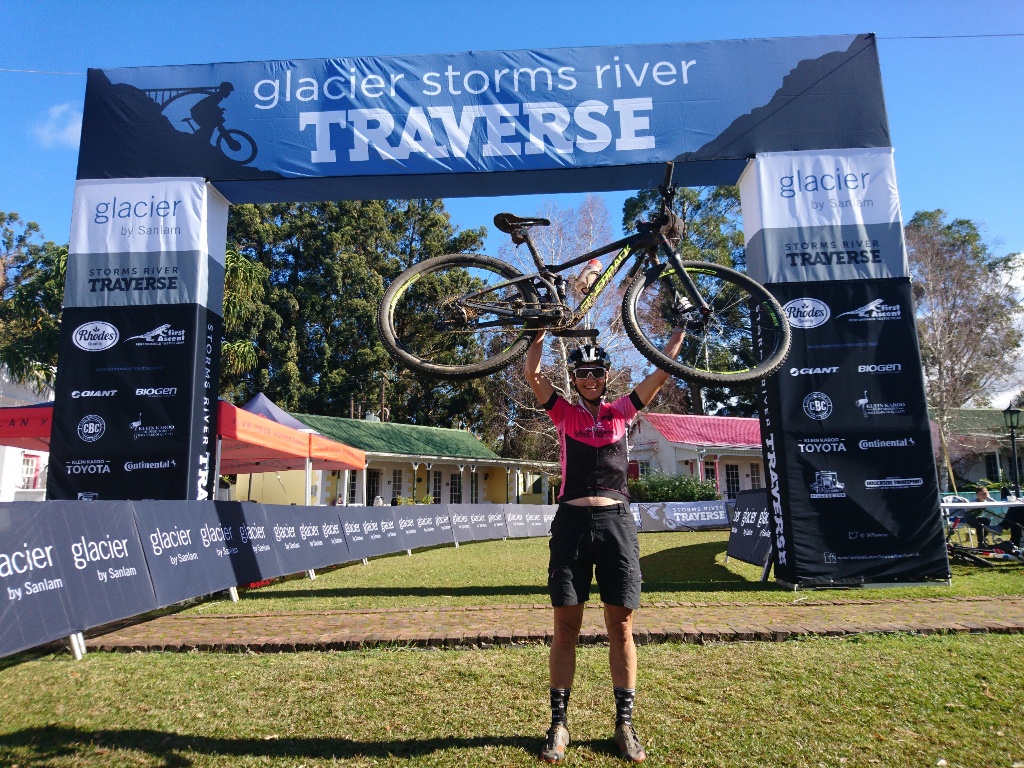 Yolande de Villiers and Sarah Hill got Women’s Month off to a winning start as they dominated the 2017 Glacier Storms River Traverse in the solo women’s and mixed categories respectively. de Villiers not only won the solo women’s race but was also the first rider across the finish line on all three days; while Hill, riding with Gavin Salt, was the leading member of the first team on the general classification standings.

The Storms River Traverse, a three day mountain biking stage race, was based at the Tsitsikamma Village Inn and took place from the 4th to the 6th of August. The stage distances were a manageable 50, 43 and 54 kilometres and it proved to be the perfect event for first time stage racers and experienced riders looking to slow down, take in the sights and soak up the relaxed Storms River atmosphere.

Hill had travelled down to the Storms Traverse on the back of a fifth place finish at the South African cross country championships at Mankele two weeks before but when her stage race partner, Nicolle de Greft, fell ill. She was paired up at registration with Giant South Africa’s Gavin Salt, to form the Liv/Giant team, and the pair immediately struck up a rapport. Salt and Hill’s neighbours in the luxury tents soon informed her of the more relaxed spirit at the Storms River Traverse. “I absolutely loved it here. I think it’s definitely a race that everyone should come and experience. That’s what it ends up being, an adventure. You get to socialise, you get to meet people and you get to ride with some really awesome, strong, crowds.” Hill said upon finishing the final stage.

Reflecting on the three days of riding Hill concluded: “It’s a great mental break, to come here and have a whole lot of fun, and to still ride. You can be competitive if you want, but the Storms River Traverse is more about pedalling and looking up to see and appreciate where you are.”

Despite having slacked off the pace from her usual level; Hill was more than a match for the men in the race, including her partner Salt. In addition to winning the mixed category and being the team with the overall fastest time, the Liv rider was also the fastest rider up the toughest climb of the race. The 1 kilometre long, 15% average gradient, climb from the Storms River Mouth to the plateau at 172 meters above sea level is undoubtedly the toughest section of an otherwise relatively unchallenging route. Hill set a remarkable time of 8 minutes and 55 seconds for the climb, to claim the Strava Queen of the Mountain and set the sixth fastest time ever.

An even more impressive performance was turned in by Yolande de Villiers, as she won all three stages of the 2017 Storms River Traverse by 17, 8 and 10 minutes respectively over the next fastest finisher, Vincent Hill. “I had to do it for the girls, it’s women’s month” de Villiers said when asked about why she rode so fast despite no pressure from the rest of the field. “I’m trying to peak for next week” she elaborated. “It’s beautiful. This area is awesome for mountain biking. So well done to Dryland.”

Further behind the leading women Nikki Haywood was riding with her Trail Angels club members. Haywood had brought a number of first time stage racers along with her and was impressed at how they grew in confidence over the course of the event. “Next year I’ll definitely be bringing more of my Trail Angels along, it’s the perfect event to introduce riders to stage racing” Haywood said. “The routes are not technical and the social spirit makes the Storms River Traverse a non-threatening mountain bike event. And there are not enough of those” she finished.