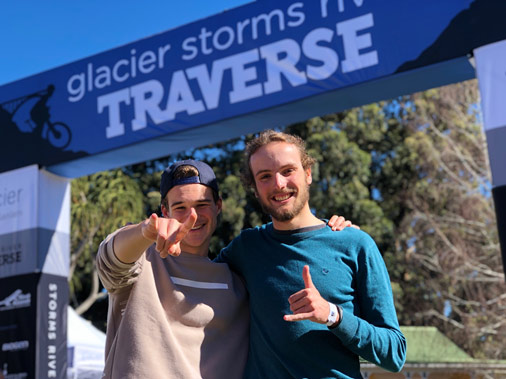 Featured photo: Aidan Connelly (left) and Rogan Smart having the time of their lives and chasing their dream in this weekend’s Glacier Storms River Traverse. Credit: MVM Media.

TSITSIKAMMA VILLAGE, Eastern Cape (11 August 2018) – They are best friends who developed a love for mountain biking at school and now they’re chasing a dream to compete at the highest level of their sport, even if their parents are telling them to get real jobs.

They rode their first stage race two years ago and surprised even themselves when they won. Now, with a small sponsorship and having caught the eye of some of the more experienced teams out there, they have dreams to be competitive in the world’s biggest mountain bike races.

“We have a bit of pressure from the parents to get something else going on the side, but for now it’s just bikes and our dream,” says Smart.

“It started about two years ago,” explains Connelly. “There was a local team race in Plettenberg Bay. We had a couple of months of training behind us but we hardly knew anything about cycling, and we ended up winning that race and took it from there.

“We’ve kind of just built on that. The dream is to do some of the biggest races in the country, and then hopefully in the world. But we’re not rushing it. We’re still quite young and hopefully with time and experience we can build towards something special. We just want to keep working our way up.”

This weekend’s Glacier Storms River Traverse, a race now in its eighth year and which has built a reputation as a relaxed and fun event for all levels of rider, has provided the perfect backdrop to showcase the unique friendship between Smart and Connelly.

“We have a good team dynamic because we know each other pretty well. We were at school together and realised via friends that we both enjoy riding. Our respective friends actually introduced us to each other,” says Connelly in what sounds like mountain biking’s version of the perfect match-making scenario.

“We were basically the only guys in school who rode. So we formed a friendship first and have become inseparable. We’ve taken the friendship onto the bike. It makes it a lot more enjoyable being such good friends. Having your mate crack a joke and laugh at you makes it more bearable during the tough stretches in races.”

While they have dreams of world mountain bike domination and have already secured a small sponsorship as well as gained the attention of some of the more experienced riders out there, their goal in this weekend’s Glacier Storms River Traverse is basically to tick off a race they had heard a lot about. And to enjoy the other side of mountain biking.

“This has been an awesome race. Racing is always good, but we came to this event specifically for the fun,” says Smart, whose assessment of their motivation this weekend gets a nod of approval from his teammate.

“We try and keep it as pro as possible, but also just have a good time and enjoy the vibe,” adds Connelly.